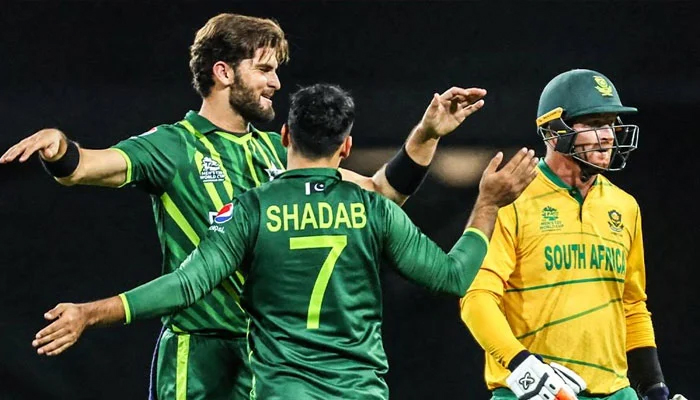 
Chasing the target, the South African team scored 69 for 4 in 9 overs, after which the match was stopped due to rain.
When the match resumed after the rain stopped, South Africa’s innings was limited to 14 overs, thus needing 74 runs in the last 5 overs to win. After the match resumed, Pakistani bowlers prevented the South African batsmen from achieving the desired target by playing tight bowling.
South Africa’s team could only score 108 runs in the stipulated 14 overs for the loss of 9 wickets.
Apart from captain Temba Bavuma’s 36, Aiden Markram’s 20 and Tristan Stubbs’ 18, none of the players could make a remarkable performance for the Proteas. Before the rain, the Pakistani bowlers initially made it difficult for South Africa to chase down the target. In the first over, the wicket of Quinton de Kock was taken by Shaheen Shah Afridi, while the second wicket was also taken by Shaheen Shah Afridi.
Riley Rousseau scored 7 runs in the third over of the innings and was dismissed for a total of 16. Shadab Khan took South Africa’s third and fourth wickets, dismissing Timba Bavuma and Aiden Markram.
When the match started after rain, Shaheen Afridi dismissed Heinrich Klaasen, Mohammad Wasim dismissed Wayne Parnell and Naseem Shah dismissed Stubbs. A Kagiso Rabada was run out in the last over while Enrique Narkia was dismissed by Haris Rauf.

How did Pakistan team score 185 runs?
Earlier, Pakistan won the toss and decided to bat first. After the failure of the top order, due to the aggressive batting of Shadab Khan and Iftikhar Ahmed in the middle order, the Pakistan team scored 185 runs for 9 wickets in the allotted overs.
Captain Babar Azam and wicket-keeper batsman Mohammad Rizwan opened the innings in the match being played in Sydney. Babar and Rizwan’s partnership could last only 4 balls at the crease. This South African batsman bowled Mohammad Rizwan for 4 runs.
Mohammad Haris, who played the first match in the World Cup, scored 28 runs in 11 balls while batting aggressively at the third position. He hit 3 sixes and 2 fours. He was dismissed lbw by Noorakia in the fifth over for a total of 38. Rabada took Pakistan’s third wicket when captain Babar Azam once again failed to bat and was dismissed for 6 off 15 balls. South African bowler Noorkia took Pakistan’s fourth wicket for 43 runs, Shan Masood was dismissed for 2 runs.
Tabrez Shamsi secured South Africa’s fifth win by breaking the partnership of Mohammad Nawaz and Iftikhar Ahmed for 95 in the 13th over. Spin bowler Tabrez Shamsi caught Mohammad Nawaz for 28 runs.
After the dismissal of Mohammad Nawaz, there was a good partnership between Iftikhar Ahmed and Shadab Khan. Meanwhile, Shadab Khan also adopted an aggressive approach. Shadab Khan scored 52 runs in 22 balls while Iftikhar Ahmed scored 51 runs in 35 balls. Haris Rauf 3 and Mohammad Wasim were out for zero.

One change in Pakistan team
Pakistan changed the squad for the match and included Mohammad Haris in the playing XI in place of Fakhar Zaman. Pakistan team includes Babar Azam, Shadab Khan, Muhammad Rizwan, Shan Masood, Iftikhar Ahmed, Muhammad Haris, Muhammad Nawaz, Muhammad Wasim Jr., Shaheen Shah Afridi, Naseem Shah and Haris Rauf.
After winning the toss in Sydney, captain Babar Azam said that the pitch is looking good for batting. Babar Azam said that Haris has been given a chance by changing the team.
On this occasion, South Africa captain Timba Bavuma said that he would try to restrict Pakistan to a low score. Tamba Bavuma said that 2 changes have been made in the team, we would have preferred to bat after winning the toss. In Sydney ahead of the start of the match, fast bowler Shaheen Shah Afridi said he was feeling well after the injury.
Shaheen Shah Afridi said that the focus is on this match in the hope of playing good cricket and winning the match. He said that the South African bowler Norkia bowls at a fast pace. South Africa’s team is so far unbeaten in the T20 World Cup, while the Pakistan team is currently in fifth place in Group Two.

The story of Mirza Ghalib, Professor Ayub Mughal of Delhi University and the history of the British era is a mystery Job...
Read more

The story of Mirza Ghalib, Professor Ayub Mughal of Delhi University and the history of the British era is a mystery Job seekers...

There will be nationwide protests if Ali Wazir is not released by 16 December; Mahmud Khan Achakzai , Mahmood Khan Achakzai, chairman of...
Read more

There will be nationwide protests if Ali Wazir is not released by 16 December; Mahmud Khan Achakzai News Jani

Patna Incident: Amit was shot in the chest by ambushed criminals, Amit was a resident of Jehanabad , <!-- ...
Read more

Patna Incident: Amit was shot in the chest by ambushed criminals, Amit was a resident of Jehanabad News Jani

Rat killing work, salary will be 25 lakhs , There is great news for job seekers in New York City, America, the mayor has announced...
Read more

US high school bans mobile phones for students, teachers and staff News in Hindi - Report: Students cut off from society after Corona, US...
Read more

US high school bans mobile phones for students, teachers and staff News in Hindi – Report: Students cut off from society after Corona, US...