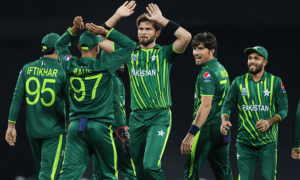 Sydney: New Zealand’s batting continues against Pakistan in the first semi-final of the T20 World Cup. In the match being played in Sydney, New Zealand captain Kane Williamson won the toss and decided to bat first. He said that he would try to put Pakistan under pressure by giving a big target. On this occasion, national team captain Babar Azam said that New Zealand will try to increase the pressure by dropping early wickets to make it possible to reach the final of the tournament. Before this, both the teams have faced each other 6 times in the T20 World Cup, in which the national team has suffered a heavy defeat. Pakistan has defeated the rival team 4 times while the Kiwi team has been defeated twice.

England's 657 runs in response to the vigorous reply of Pakistani openers in Rawalpindi Test , By the end of the second day of the...
Read more
کھیل

A new Ukrainian community center opening in Dublin will provide a range of support. , ...
Read more