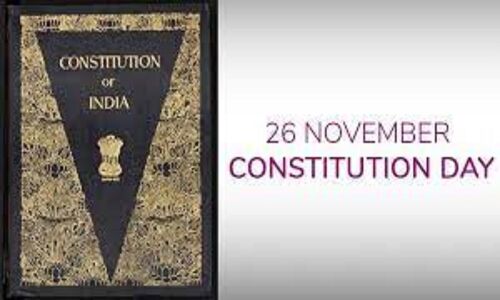 Human civilization has a long history during which numerous achievements have been recorded so far. The spirit of solidarity, the ability to take moral decisions, the balanced position of the power equation, the preservation and propagation of regional and cultural heritage, have been important areas of concern since ancient times. Man, being a social animal, has always been striving in this direction to express his individual freedom. On the other hand, the constitution of the world has served as the main guide to ensure aspirations, related goals, individual and collective social development. India is the mother of democracy and has a long tradition of cultural heritage. Constitution Day observed on November 26 holds special significance as it is celebrated in Amrit Kaal.

In 2015, the Modi government announced November 26 as Constitution Day. Today, we are celebrating the 73rd anniversary of the constitution, through which we seek to pay full respect to those forefathers who laid down their lives to uphold the respective values ​​and upon which the framers of the Constitution were founded. decided. It helped fulfill the aspirations of the generation. It is the result of his foresight that the constitutions of many countries today bow before diverse interests and imbalanced power balance. However, the Indian Constitution has fully stood the test of time. This sacred, concise and living document is an excellent guide to India. The inherent flexibility to adapt to changes according to social needs has resulted in an excellent and ideal constitutional framework.

The phrase within the Constitution that “We are the citizens of India” clearly states that our Constitution has consistently centered on citizens in the form of a proposed environment. It is similar to the defined role of developed institutions, governance and judiciary, legislative system, executive, federalism, local government and other independent institutions, whereby the individual’s privacy is collectively focused. The combination of rights and duties of citizens are two sides of the same coin expressed under the great goal of nation building. Article 246 and 7th Schedule of the Constitution clearly divide the legislative powers between the Center and the States and the harmony between rights and duties makes the Indian Constitution even grander.

Dr. BR Ambedkar, Chairman of the Constitution Drafting Committee, during the closing debate on 25 November 1949, commented on inequality entering into life the paradox of political equality through the principle of one person, one vote, one value. . In which social and economic life was also taken into consideration. While introducing the Constitution, he stopped to ponder the subject, “How long shall we continue to live these contradictions?” Now the amrit call comes with a recognition of values ​​on the occasion of the centenary of independence. Dr. Sahib is taking us closer to the thoughts and ideas of Ambe Dakar in preparing the infrastructure for the development of the nation.

Post-2014, the Modi government’s vision, the activities it has undertaken and the results it has derived are aimed at eliminating the inherent contradictions in the social and economic spheres. In the context of ‘Sab Ka Saath, Sab Ka Vikas, Sab Ka Vishwas and Sab Ka Prayas’, the initiative of the government is to leave no one behind in the activities related to nation building and thereby create such a comprehensive and strong system. In which constitutional values ​​are respected. Special Inclusion. To recognize individual potential, philanthropy is being done in a multifaceted manner in every sector from health, housing, energy, education, industry, space and culture. The policy and implementation approach paves the way for the development of the society in a democratic manner.

Implementation of a coordinated and area-specific project-based approach is making people’s lives easier. They aim to reduce the compliance burden on people, create effective plans for saturation level implementation targets, and result in better governance by the Modi government. The Modi government has increased the confidence of the common man. The success of the aspirational districts program is yet another clear proof of the Modi government’s adherence to the constitutional spirit.

India’s presidency of the G-20 grouping from next week is an opportune moment to showcase these constitutional values ​​that resonate across the globe. India has already emerged as the pride of developing countries. The need for reformed international governance through the United Nations system, reformed multilateralism, sustained efforts and a clear vision to end the menace of terrorism, equitable sharing of benefits and responsibilities in climate change and environmental sustainability initiatives. Sharing, cautious stance in favor of world peace. In the ongoing war between Russia and Ukraine, need-based multi-alignment, humanitarian measures for developing countries in difficult times of the pandemic such as providing assistance through vaccine friendliness, emulating constitutional values ​​and strictly for the global interest. To struggle.

Being a multicultural society, India’s innate ability to embrace ‘unity in diversity’ and its unique ability to forge consensus on diverse and conflicting views at international fora. Our commitment to constitutional values ​​has the potential to shape global discourse and build strong institutions based on democratic fundamentals for a better and sustainable future for future generations.

Constitution Day is an opportunity to reflect and create a catalyst to inculcate constitutional values ​​in our thoughts, vision and actions individually and collectively. It leaves an indelible impression on us that the influential values ​​emanating from the Constitution and the wisdom it prescribes are valuable not only to India but to the entire humanity. We must understand the seriousness of these values, the spirit of the scriptures, embrace them and work continuously to make them more understandable. Let’s pledge to uphold the incredible legacy associated with these forgotten and unsung heroes. Being a proud citizen, now is the time to show the world again that ‘WE, THE PEOPLE OF INDIA..!!!’

Share
Facebook
Twitter
Pinterest
WhatsApp
RELATED ARTICLES
Finance Minister Nirmala Sitharaman will present the country's budget today, will the people get relief? , This will be the last complete budget of the...
Read more
देश

LPG price hiked by Rs 60 per kg , The government also dropped LPG bomb on the people who are suffering from inflation, after...
Read more
Breaking News

Lanarkshire MP pledges commitment to Holocaust Memorial Day , It comes on the anniversary of the liberation of the infamous concentration and death camp, Auschwitz-Birkenau
Read more
news

Dr. Marcia Anderson is among the experts being honored for her contributions to First Nations health amid the pandemic. , A physician who played a...
Read more

Dr. Marcia Anderson is among the experts being honored for her contributions to First Nations health amid the pandemic. News Jani