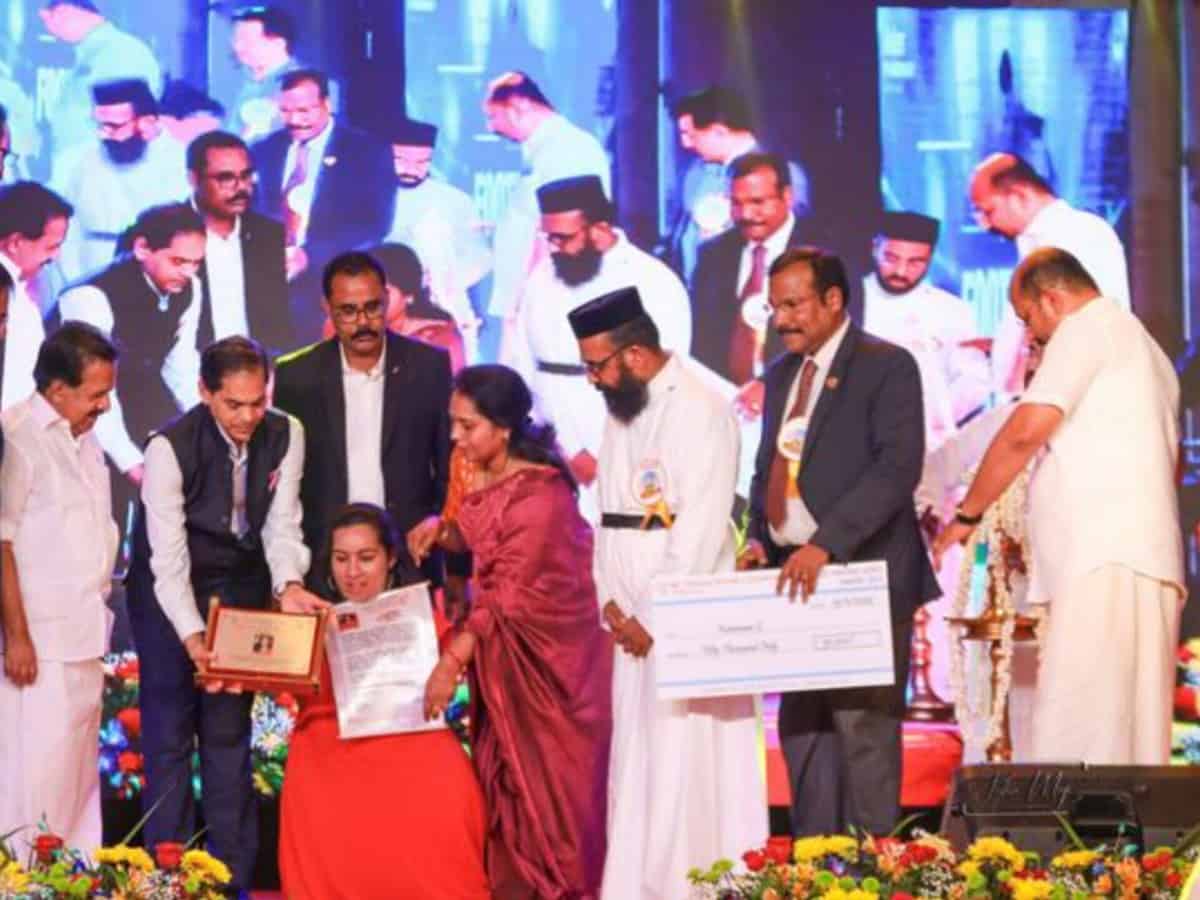 Abu Dhabi: A 21-year-old woman from the South Indian state of Kerala has received the Unsung Hero Award from St. Thomas Cathedral, Dubai for securing first position in Bachelor of Music from Kerala University despite physical challenges.

Although Kanmoni S was born without hands and had some leg deformities. But that didn’t stop Kanmuni from pursuing his dreams.

Kanmuni was selected for the Unsung Hero Award for topping the Bachelor of Music from Kerala University with 82% marks and excelling in arts, crafts and music for spreading a positive message in society.

According to a report of Gulf NewsIndia’s Ambassador to the UAE, Sanjay Sudhir, presented the award to Kanmuni at the church’s annual harvest festival on Sunday, November 14.

St. Thomas Orthodox Cathedral chose Kanmony for the award, which was held in memory of Basilios Marthoma Didymus, former primate of the Malankara Orthodox Syrian Church, who championed the cause of education.

A native of Mavelikara, Kanmuni is a student of Thiruvananthapuram Swathironal Music College. Kanmani aspires to pursue a master’s degree in music. Kanmani has been active in arts festivals even during her school days. Kanmani, who has done many concerts, has surprised everyone by posing with her legs.

In 2019, Kanmuni received the Union Ministry of Social Justice Award for Creative Excellence. Kanmani uploads every moment of her life on YouTube with the aim of inspiring others.

According to media reports, Kanmuni had great support from her family right from her childhood. Kanmuni says her mother encouraged her to learn singing and drawing.

“We need to be happy with what we have and use our best abilities to excel in everything we do,” Kanmuni said. Gulf News.

“The people of the UAE have shown me so much love. I am truly grateful to them and I will always be indebted to the church officials for choosing me for this award.

Suspicion of theft; The man was tied to a tree and beaten. , Representative image ...
Read more
Ashapura saw mill

Suspicion of theft; The man was tied to a tree and beaten. News Jani

French President Macron congratulated India on getting the G-20 chairmanship, said – they will succeed in creating a safer world. News Jani

Prince Harry 'knew royals would be shocked' before Oprah chat Royal | News , The past year has seen the Duchess launch a...
Read more

Musk blocked OpenAI's access to the Twitter database. , He also stated that OpenAI was "launched as open source and non-profit. Neither is still true".Many...
Read more

All set for the municipal elections in Islamabad, we set out to build a nation. Ali Nawaz Awan , Pakistan Tehreek-e-Insaf Islamabad Region...
Read more

All set for the municipal elections in Islamabad, we set out to build a nation. Ali Nawaz Awan News Jani

George Clooney is a loving husband as he helps wife Amal dress up. , The couple were at the ceremony to receive the award for...
Read more

George Clooney is a loving husband as he helps wife Amal dress up. News Jani

Rape and murder of a young girl, court sentenced to life imprisonment. A minor who was coming home from school was taken...
Read more

Rape and murder of a young girl, court sentenced to life imprisonment. A minor who was coming home from school was taken to...