What we know so far about the Coimbatore blast. News Jani 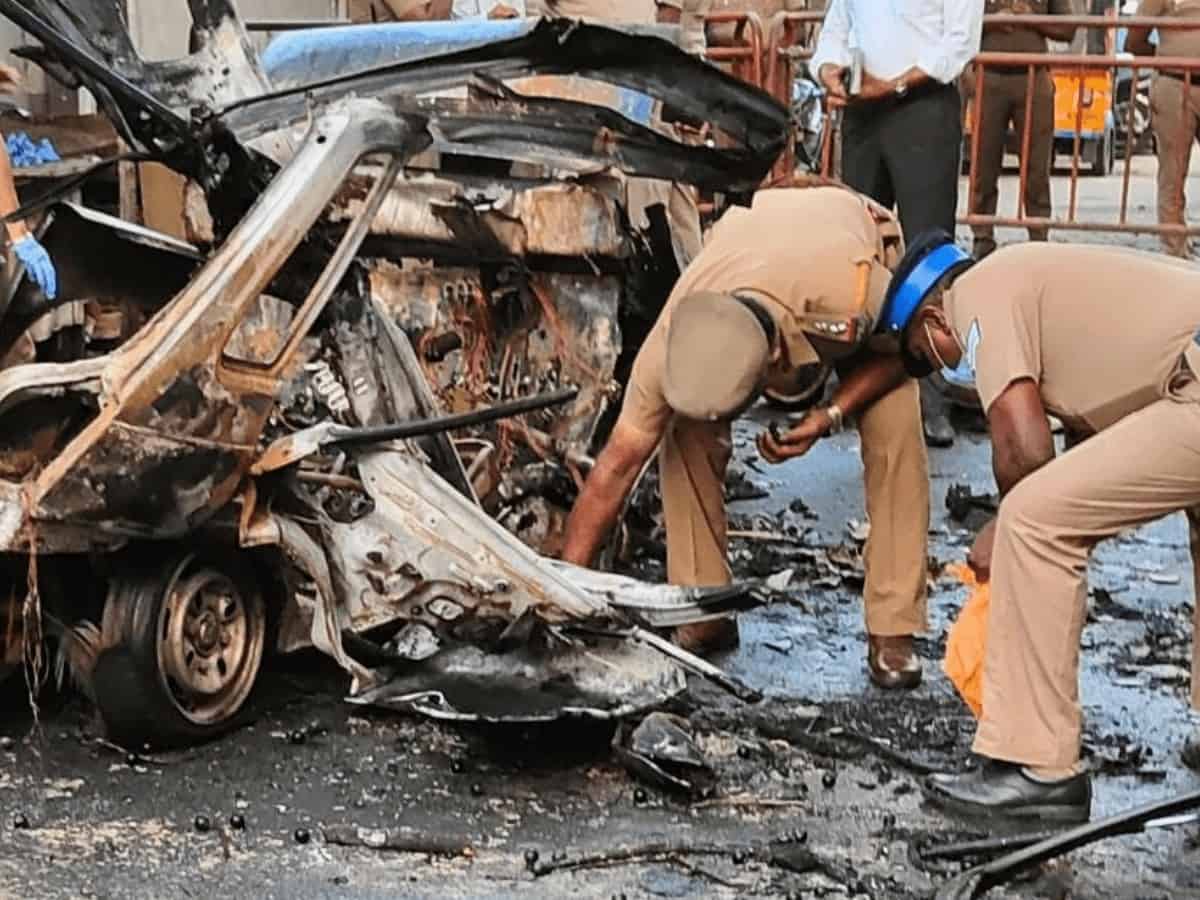 What we know so far about the Coimbatore blast.

29-year-old Jamisha Mubin, a resident of Akdam, has become a household name in Tamil Nadu on the occasion of Diwali since October 23. Mubeen is the prime suspect in the Coimbatore blast case that has garnered much public attention. The ruling Dravida Munnetra Kazhagam (DMK) and the opposition BJP and AIADMK have been at loggerheads over the issue as the blast took a communal turn.

On October 23, residents of Kottaymedu in Coimbatore were in for a shock when a car exploded in front of the Sangameshwar temple at 4 am. The explosion was caused by one of the two LPG cylinders kept inside the vehicle.
The blast site was cordoned off just before 5 am. Director General of Police C Salinder Babu along with six special teams investigated the matter for two days. After some time of investigation, it was found that the victim of the blast was a person named Jamisha Mubeen.

On October 24, five people who were said to be accomplices of the accused Mubeen were arrested. Mubeen’s cousin Muhammad Azharuddin, 25, was arrested by the police and the Unlawful Activities (Prevention) Act was invoked against him.

After analyzing the CCTV footage, the arrest of the five persons was carried out. Images from the footage show five people carrying a large object wrapped in a white sack.

On October 27, 28-year-old Afsar Khan, a relative of Mubeen, the sixth accused in the case, was also arrested. Khan is accused of procuring the raw material required for the blast from e-commerce websites.

The visuals showed five accused with Mubeen, carrying a heavy object wrapped in a white sack from Mubeen’s residence at HMPR Street in Kottayamdu. A timestamp on the video shows the man carrying the sack in the narrow street at 11:30 p.m., about five hours before the explosion.

Shortly after Afsar Khan’s arrest on October 27, the National Investigation Agency (NIA) took over the investigation on the recommendation of the Tamil Nadu government.

It was later found that Mubeen and the two accused had allegedly done reiki of three temples including the Sangameshwar temple.

After the blast, political parties and police officials clashed in Tamil Nadu

On 29 October, Bharatiya Janata Party (BJP) Tamil Nadu state president K Annamalai alleged that the Tamil Nadu police was sitting on “high alert” from the Union Home Ministry. He said it took four days for the police to issue an alert to the district police officers on October 21.

He further argued that CMM’s Stalin of Tamil Nadu, who also holds the home portfolio, has to answer why no action was taken even after the alert was issued on October 18. Explosive and many officers will lose their jobs.

He argued that there has been a delay in transferring the case to the NIA. He further claimed that he has evidence which proves that Mubeen was kept under surveillance by AIADMK on the information of NIA. “After the DMK assumed office, the surveillance of some individuals was relaxed. The alert was specific from the Center on October 18. It is not clear why the police ignored it.

The TN Police responded and accused Annamalai of trying to divert the investigation by defaming the police. He added that the circular received by the central government was shared with all the city and district police authorities and it did not specifically mention Coimbatore.

“Had the Tamil Nadu Police received any clues about the Coimbatore incident, they would have conducted raids, seized explosives and arrested those involved,” said a press release from the TN Police Department. Is.

Even the Governor of Tamil Nadu, RN Ravi, expressed his displeasure over the state government’s delay in handling the case and expressed concern over the possible destruction of vital evidence. Praising the police, Ravi found the government at fault in transferring the case to the NIA.

According to the police, the alleged motive was not to target the Sangameshwar temple, but a larger temple nearby.

Jamisha Mubeen was a mechanical engineering graduate who married Nusrat Mubeen (a hearing and speech impaired woman) in 2017.

Nusrat, with the help of a sign language interpreter, informed the Coimbatore police that when she visited Jamsha just “four days before” the blast, she saw only one LPG cylinder in an empty house.
Police also recovered 109 items from his residence, including 75 kg of explosives, which police said were used to cause mass damage.

According to the police, Mubeen is said to have been inspired by the Islamic State of Iraq and Syria (ISIS) and the 2019 Sri Lankan Easter bombings.

Mubeen worked in a bookstore owned by Hani Ibadullah, an accused arrested by the NIA in connection with the 2019 Easter bombings in Sri Lanka. After the shop was closed, Mubeen started doing strange things.

According to the police, Mubeen was a radical, according to material items, including his diaries and notes allegedly recovered from his home. Police also say that he hated other religions, especially idolatry. Mubeen was not part of any Jamaat or Masjid Jamaat.

On November 3, a bundle of handwritten notes was recovered from Jamsha Mubin’s house allegedly containing Hadiths (The series of records of the spoken words of Prophet Muhammad) and Jihad (War against the enemies of Islam)

A note from Mubeen’s residence reads, “People are divided into Muslims and non-Muslims.The unbeliever)” In addition, the police found a note stating who had the duty of jihad and who did not. The police also allegedly found a slate with an ISIS flag logo on it. On another slate was written ‘Whoever lays hands on the house of Allah, we will destroy it’.

An officer is speaking. Times of India It also said that Mubeen had written on a piece of paper that fighting a holy war is the duty of the youth and not of the children or the elderly.

My son is innocent, claims the mother of accused Muhammad Talha

25-year-old Talha’s mother, Hafsat Biwi, is claiming that her son was not aware of the terror plot. “He sold the car only because he worked as a used car dealer,” he said. However, police said Talha had not maintained sales records. “The car was owned by at least nine people before Mobin. Talha sold the car to him but kept the transaction secret. So we suspect he was helping the operation,” said a senior police officer.

The case is currently being investigated by the National Investigation Agency. Siasat.com Will keep abreast of any new developments coming through.

A woman who was raped several times tried to set herself on fire in court to seek justice. News Jani

The existing collegium system should not be derailed: Supreme Court News Jani

The VC directed the students, staff to be vigilant. News Jani

The US echoed India’s views in rejecting China’s opposition to the ‘Yud Abhyas’ exercise. News Jani

A new Ukrainian community center opening in Dublin will provide a range of support. , ...
Read more