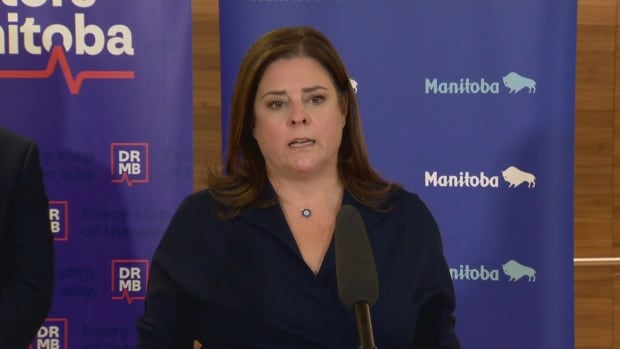 Manitoba’s premier says the province is not considering rolling back rules around mask-wearing, as a surge in children with respiratory viruses has put Winnipeg’s children’s hospital on hold.

A Combined Health spokeswoman said in an email Thursday that the hospital is offering overtime and pulling staff from other areas to work in its high-capacity pediatric intensive care unit, or PICU.

Eleven children were sick enough to end up in the unit on Thursday afternoon. That’s two more patients than the PICU’s base capacity of nine staffed beds, although the spokeswoman said the unit has had to regularly exceed that capacity since spring.

Premier Heather Stephenson said getting people to start wearing masks again is not where the province’s focus is this flu season.

“We’re talking about getting vaccinated and getting flu shots,” Stephenson said at a news conference about getting health care professionals into the public system.

“For now, we’re not looking at any mask mandates.”

Overcrowded emergency departments have led to long waits for families like the Star Spences.

Spence said she has been in the hospital for a week with her six-year-old daughter Claire, who she said has a cyst on her pancreas.

When he arrived at the emergency room last Thursday evening, Spence said he waited four to five hours to get into a room and about 24 hours before being admitted to a ward.

“There were a lot of sick, crying babies,” Spence said.

“They started allowing only one parent with each child in the waiting room and the other parent would have to wait at or outside the hospital until the child was called into the room.”

Canada’s chief public health officer, Dr. Theresa Tom, is among those asking people to start wearing masks again as hospitals across the country face a surge in the respiratory virus.

Winnipeg emergency room physician Dr. Doug Olofson says the need for a mask mandate is especially clear after the medical director of the emergency department at the city’s Children’s Hospital said. The crisis has reached its peak..

“It basically means lives are at risk,” said Eyolfson, who does not work at the children’s hospital.

Virologist Julie Lajoie has also called for the return of mask-wearing rules in Manitoba. It’s also important to stay home when you’re sick, stay up-to-date on COVID-19 and take steps like flu shots and improving ventilation, she said.

And while people can choose to wear masks on their own, Lajoie said she hopes the province will reintroduce mask-wearing laws.

“If we talk about a recommendation, it’s better than nothing. But we’ve also seen in the past that just having a recommendation is not enough — it’s not strong enough,” he said.

Dr. Marnie Hanna, president of the Manitoba Pediatrics Society, said whether official mask laws are reinstated or not, it’s common knowledge that covering your face helps reduce the transmission of respiratory illnesses.

“Honestly, we don’t have to wait for the government to say. It helps,” Hanna said.

“There are multiple viruses out there right now and they’re spreading like wildfire. … This is the worst we’ve seen in the last three years.”

Shared Health said the busy emergency department at Children’s Hospital in Winnipeg has seen an increase in the number of children with respiratory illnesses — including influenza and RSV, or respiratory syncytial virus — showing up in the emergency room over the past two weeks. are giving

Care teams are also seeing children with multiple respiratory viruses at the same time. And now the sickest children increase the number of people in emergency, disrupting the flow of normal patients because they require longer care, the spokesman said.

When asked if the province could do anything to help the beleaguered children’s hospital, Health Minister Audrey Gordon pointed to the province’s RSV prophylaxis program, which aims to protect babies and young children from getting sick. To protect from It was launched earlier this year.

He added that if you are sick, it is also important to wash your hands and wear a mask.

For Eyolfson, the province’s response does not seem adequate given the circumstances.

“It’s terrifying,” said Eyolfson, a former Liberal MP. “I think we need leadership now that it’s getting worse, and that leadership doesn’t seem to be there.”

Crown and Indigenous Relations Minister says Ottawa is failing to protect Indigenous women and girls. , The federal government is failing in its responsibility to...
Read more
News/Canada/Manitoba

I used to donate to a food bank - then suddenly, I needed one. , This first-person column is the experience of Donna Swarzynski, a...
Read more
News/Canada/Manitoba

I used to donate to a food bank – then suddenly, I needed one. News Jani

The United Nations Security Council has condemned the terrorist attack on a religious school in Afghanistan. , United Nations: The UN Security...
Read more