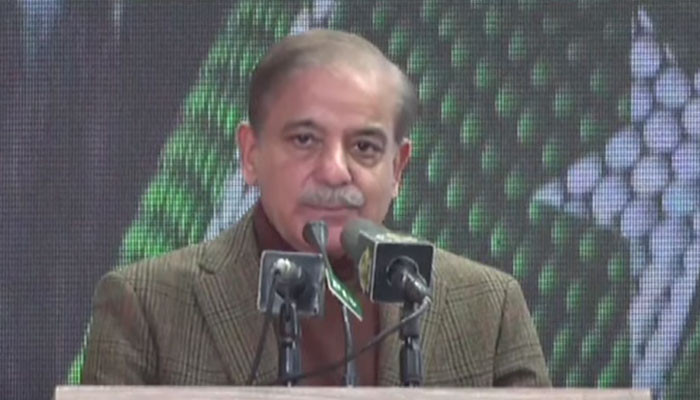 Shahbaz Sharif ready to sacrifice political earnings to save the state

Prime Minister Shahbaz Sharif has said that he is ready to sacrifice political mileage to save the state.

The Prime Minister inaugurated the Pradhan Mantri Yuva Vyaparijan and Krishi Loan Yojana. Under this scheme, loans will be made available to the youth.

Addressing the function organized in Islamabad, the Prime Minister said that when Khadim-e-Ala was in Punjab, he gave interest-free loans to the youth and distributed laptops among the youth.

He said that he wants to make the youth stand on their feet. In the past, a loan of 40 billion was given and the recovery was 90 percent.

He said that in the era of Nawaz Sharif, laptops worth Rs 15 billion were given to the youth, when they were given laptops, it was said that it is a political bribe.

The Prime Minister said that we are passing through very difficult times and conveyed to the IMF that we want to complete our programme.

He said that we have given a clear message to the IMF that we want to complete the 9th review without delay.

The Prime Minister said that together we will get Pakistan out of its difficulties.

The Prime Minister said that if we have to save Pakistan, we will have to give up politics. I am ready to sacrifice political earnings to save the state.

Everyone has to accept responsibility for the situation in Pakistan, he said. Everyone is naked in this bath, including us and the martial law regimes.

Shahbaz Sharif said that the loss of what we did in 75 years is in front. He will fulfill the responsibility of saving Pakistan to the last extent.

The Prime Minister said that I will give my life to save Pakistan, I will take every step.

He said that taking loans is not allowed, the martial law governments are also responsible for the current situation in Pakistan.